Production Woes in the Sunshine State

What’s on the line: Premier Citrus Packers, a major international fruit producer, handles 2 million boxes of produce each year. The market depends on them. But the company’s old, out-of-date conveyor system was causing problems, and the future of the fruit mogul was uncertain.

Premier Citrus Packers can’t afford downtime. Neither can the global market that depends on them.

In the prime harvesting season of October through April, a staggering 2 million boxes of fruit are handled in the company’s packing facility in Vero Beach, Florida. That’s more than any other citrus grower in the state and among the largest operations in the world. Packaged under the Premier brand and several other private labels, the oranges and grapefruit are distributed to grocery chains across the nation and shipped by boat to Europe and Asia.

The entire Premier production line depends on two conveyors: an overhead system that supplies corrugated boxes to line workers and a belt conveyor that delivers fruit to a pair of packing stations. For the facility to operate, both of these conveyors must be functioning. When one is down, the entire operation is down. And downtime is bad for everyone: Premier, the global market, and you, the consumer. No conveyor? No fruit in the produce section. 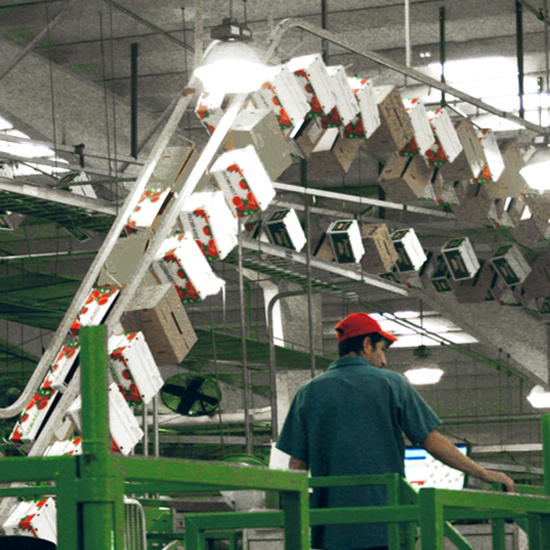 Until recently, downtime was a growing problem for the global fruit producer, and it threatened to get worse. The facility had an aging, out-of-date overhead conveyor system. Both the track and the chain were worn-out. Due to its age and heavy usage, the system broke down constantly, starving the line of packing boxes and cutting into productivity.

Premier Citrus Packers needed to protect their bottom line, so they partnered with Richards-Wilcox Conveyor to engineer a solution.

Our team replaced the out-of-date system with a new Richards-Wilcox Zig-Zag® overhead conveyor. We used the same footprint as the old track, allowing us to upgrade the system without modifying other elements of the facility. To prevent any interruption to productivity, we installed the conveyor in just a few weeks during the summer, after the company’s busy season.

See our conveyor in action:

Now, Premier Citrus Packers has a conveyor they can depend on.

The new system is built to last: stronger, more adaptable and ready for the future. It means less downtime, higher productivity, and more produce.

That’s good for the company, the international market, and anyone who enjoys a glass of OJ in the morning.

Discover why Richards-Wilcox Conveyor is the right choice for your system.

Enter your contact information. We'll get in touch ASAP.